I’m certainly in that category of people who works too many hours and finds it a struggle to be inspired to cook after a long day, this was particularly the case when I used to live alone.  Whilst I could never quite bring myself to eat the frozen dinners in the supermarket, it was way to easy to resort to takeaway food, cheese on toast or simple pre-made pasta dishes.  So one day I decided I needed to start taking care of myself better and I turned into a food nerd.  Pre-cooking large quantities of food on the weekend that I would freeze for mid-week dinners.  It was cheaper and I was eating better.

I’m probably a little more motivated to cook on a nightly basis now than I used to be, and if good fortune strikes when I’m not in the mood to get in the kitchen, then the other half will often step up to the plate with his creations.  Nevertheless, there is still many a night when we could quite happily sit in front of the tv and ignore the idea of dinner altogether.   So this is my solution…..prefrozen dinners that require only basic preparation to serve up healthy, nutritious and cheap meals.  Sometimes just requiring re-heating, others just add pasta, a quick salad or toast, these are pretty much guaranteed to be from fridge to table under 15 minutes so they are my trusty mainstays.

Check out a previous posting for how to make the Cheese and Spinach Triangles, but today I’m preparing both risotto and Bolognese sauce for us to fill up the freezer.

Because I don’t have a million plastic containers, I line mine with freezer bags and then create food like bricks which means I can take the containers out of the freezer and not have frozen packages running about everywhere.  Great for freezing portions.

And a great tip from one of my best friends

” before freezing any premade foods (pasta, bulk soup you have made ect) or un-cooked meats. Chill them in the fridge first. This gives the product time to slowly chill before full freeze. Your less likely to shock the product and ruin it before it has had time to adjust. 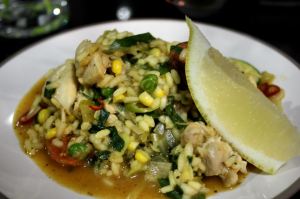 and for Leah’s version of a Bolognese Sauce…..