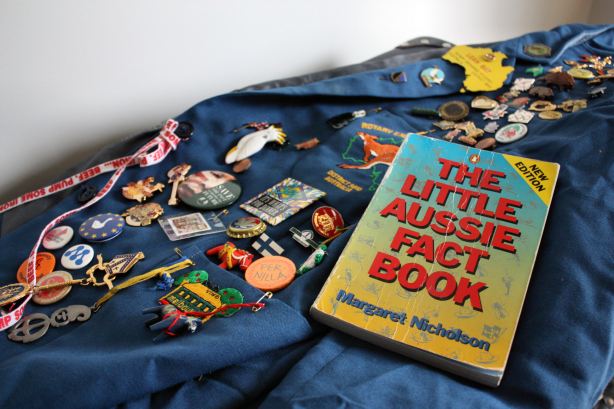 My story of ANZAC biscuits starts quite a  time ago……

When I was 17 years old, I spent a year living in Sweden as an exchange student.   It was back in a time in my life where my interest in food lay more in the eating, a time before I really wanted to learn to cook.  It was a year that changed my life in so many ways,  when I discovered what being Australian meant to me.

As part of my exchange experience I would be asked to talk to people about Australia, be it a Rotary Club or a school class.  Doing this consisted of a slide show (am I showing my age yet?), talking in my pidgin Swedish/English and sharing one of the very few food experiences that we can call our own.   Being a guest in a country that has a large range of national and regional dishes it was not easy to explain we don’t really have “Australian” food.

Now, for anyone not familiar with our Australian food culture, it consists of enjoying and celebrating the joys of everyone else’s food traditions, and there is very few things we truly can call Aussie food, but one of the recipes we do hold with pride, is our Anzac Biscuits.

And so with my limited range of cooking experience Anzac biscuits became a part of my repertoire.  So much so that I could make them off the top of my head for years afterwards.  However, it’s  been a few years since I’ve made them now, and discovering that the other half likes them was all the encouragement that I needed to break out the recipe again this year.

Most Aussie kitchens have their own version of this dish, but I can proudly say mine still comes from my trusty little exchange student handbook, The Little Aussie Fact book.  Full of fabulous and useless information that I am hardly likely to touch again, this little treasure sits on my recipe book shelf, instead of with the hefty resources it would probably like to aspire to have as its companions.

Now the true story of where Anzac biscuits come from is a whole other matter.   Anzac standing for Australian (and) New Zealand Army Corp, which was formed at the beginning of WWI (1914).    The story goes that these biscuits were made and sent to the soldiers fighting at Gallipoli (Turkey) by their families back home.  I have made these for Anzac day, 25th April,  which is a day of remembrance for all the fallen Australian & New Zealand Soldiers of wars past and present.   A large number of the population will rise before dawn, to attend a local service in remembrance of those who have served this country.

For me, baking these biscuits is partaking in something that is a part of being Australian. 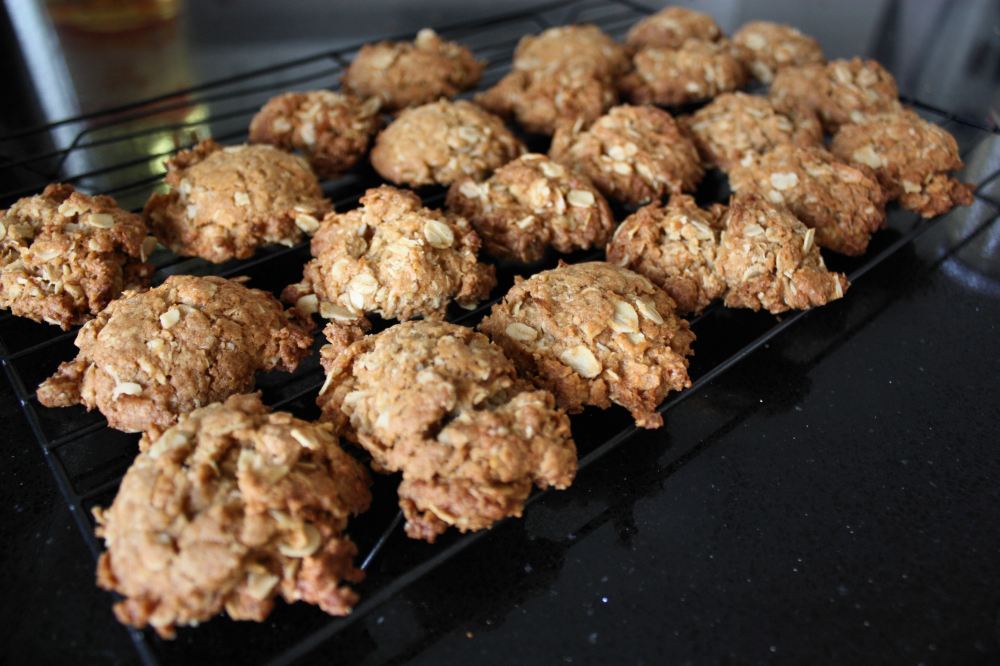 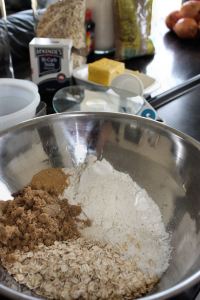 Melt butter and golden syrup in a large (this is important) pan over a low heat.  Add bicarbonate of soda that has been mixed with the boiling water.  This will create a honeycomb for anyone wondering what the amazing explosion is that happens  in your saucepan.

Combine dry ingredients in a mixing bowl and then pour the melted mixture into the centre and mix until a firm consistency. 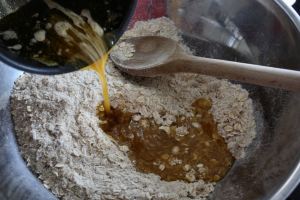 Drop slightly rounded teaspoonfuls of mixture onto a cold baking tray.  Cook for about 15 mins in a moderate (180c) oven or until golden brown.  allow to cool before eating.

Happy Cooking to you all,