I had the most exciting of packages sitting on my kitchen counter when I got home from work on Thursday night.  My copy of Claudia Roden’s The New Book of Middle Eastern Food had arrived.    First a happy dance, and then it was not too long until my nose was deep into the pages of this gorgeous book.  I had been anticipating this delivery for about 2 weeks and was desperate to get a head start on some of the delicious recipes that I could create in the week and a bit that is left of this months book club.   I’ll be writing more about the book itself over on The Cookbook Guru but for now I thought I would share my first recipe that I’ve made.

I know this is not very groundbreaking in terms of the complexity of the first recipe I’ve chosen, but I had the most beautiful eggplants in my fridge and we’ve been having one of those kinds of weekends where you graze your way through the day whilst we go from project to project taking some time out to play Canasta in the sun with a few beers.   I had roasted the eggplants a few nights ago as part of a big vegetable feast with the anticipation of making dip for the weekend anyway.  We were getting Baba Ghanoush whether it came from Arabesque or The New Book of Middle Eastern Food.

Along with my eggplant, I roasted a whole hand of garlic to go with it, wanting mellow flavours rather than the sharp versions I have embedded in my memory of eggplant dips past.  I also chose to go with a version that had no tahini and added some greek yoghurt instead.  Quite mellow and understated we found the dip best served with some of the dukkah encrusted almonds I made last week to give flavours some extra zing.  I think next time I would perhaps add a small dash of cayenne pepper or sumac to the mixture to help round out the palate a little.  Failing that I would be making the effort to grill the eggplant on the bbq so that I end up with a smokier, char grilled version.

from The New Book of Middle Eastern Food by Claudia Roden

Rub some olive oil onto the whole eggplants and roast or grill them whole until they are soft in the middle and charring slightly on the skin.  Allow to cool slightly and then peel the skin from the flesh. Allow the flesh to cool completely.

Place all of the ingredients into a food processor bowl and process until the mixture is smooth.  If you like your dip a little bit more rustic then perhaps pulse the mixture until the eggplant is in smaller pieces and you have the desired texture. 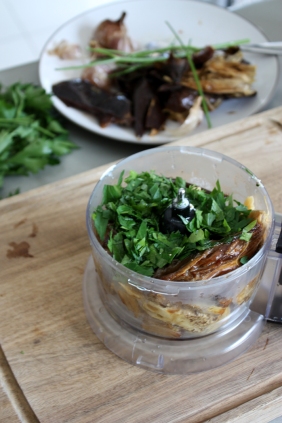 Adjust your seasoning if required. Serve cold with pita bread or lavoush and decorated with a sprinkling of sumac.