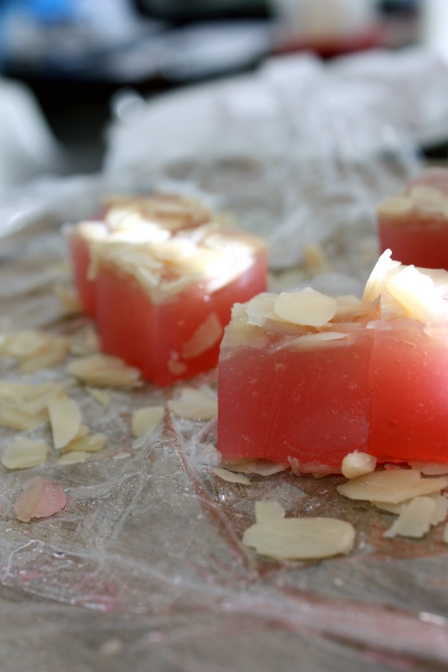 The time has come for me to attempt this delicious and exotic sweet in my kitchen once again.  Many of you would remember a not so successful attempt that was made at Christmas time to make Turkish Delight (Rahat Lokum).  The weather was perhaps our biggest enemy as the heat and humidity resulted in a mixture that would not set successfully and had the dusting of icing sugar and cornflour which melted the minute that the Turkish Delight was removed from the fridge.  Five months later and the climate has moderated here in Brisbane much to my delight.  A far more baking and sugar cooking friendly environment.

The other challenge that was perhaps not evident until after the fact was the quality of the recipe that we were using.  Whilst it sounded great in theory I found myself a little stressed with the sugar cooking process and the flavour that resulted was heavy in cornflour and not very palatable.  The texture appeared to be good but it was highly pasty and not very nice to eat even though it looked delightful.

Some valuable lessons learnt it made sense for me to turn to an authority in Middle Eastern cooking for my next attempt.  It would be hard to go past Claudia Roden as the expert in question so when Lady Red Specs at Please Pass The Recipe dared me to try this recipe as part of The Cookbook Guru I could hardly turn the opportunity down.

First up I have to say that this recipe of Turkish Delight was far less intimidating to approach.  No mention of a sugar thermometer, no tricky techniques or scary ingredients. I found the recipe straight forward and clear to read and understand and the method is one that even a first timer to cooking with sugar should find easy to follow.  One comment I will make is that you can quite successfully halve the recipe.  Claudia’s note of the quantity, coupled with discovering that the recipe asked for 2.5KG of sugar had me a little scared of just how much this was going to make.   So unless you’re planning to make this for a party or plenty of gifts at Christmas time I would recommend a smaller quantity in proportion.

For colouring the Turkish Delight I learnt a very special trick from Lady Red Specs at Christmas time which I think is worth sharing.  Use the juice of some frozen raspberries for the best and most natural way to colour your sweets.  I used about 1 cup which I pressed through a sieve to avoid all the seeds.  I added this at the same time as the lemon juice and rosewater.  If you avoid colouring your rosewater flavoured Turkish Delight will actually be a slightly yellow colour.

Finally, time is one of the key ingredients for this recipe.  It is not something that you can rush, but the time that you take will be paid off by the quality of the end result.  Even once you think your turkish delight is ready to set, cook it for a little longer.  Even with this batch I still think mine was too soft and I’ve ended up with it sweating a little water into the icing sugar/cornflour mix when I’ve dusted it for storing.  I think I’ve saved it but I’d definitely be cooking longer in the pan for the next batch.

The flavour of this turkish delight is beautiful by comparison with the first one I made.  Light and delicate rather than pasty in your mouth.   The raspberry juice adds to the balance of the lemon and rosewater against the massive amount of sugar that you need.  I’d still be looking for a firmer texture, but I’ll be quite happy to snack on this attempt in the meanwhile and won’t be altering the flavours in anyway next time.

Put the liquid glucose and the sugar into a large saucepan with 600ml (1 pint) of water.  There needs to be enough room to add the cornflour mixture so make sure there is plenty of space.  Stir well and bring to the boil, stirring occasionally.  Keep cooking until your cornflour mix is ready

Whilst your sugar mixture is heating place your cornflour into another saucepan over a low to medium heat and slowly add 1 1/2L (2 1/2 pints) of water to the flour stirring well to avoid getting lumps.  Cook the cornflour mixture slowly until it thickens into a paste, stirring continuously or it will separate.  Once it is the right consistency then add this mixture to the sugar syrup which should be boiling at this point.  Stir well with a wooden spoon to ensure that the mixture is smooth. 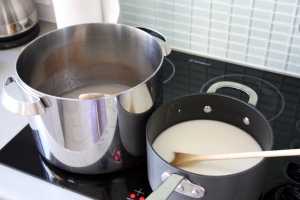 Bring the new mixture to the boil again and then turn down the heat to a low level.  Cook for at least 3-4 hours, stirring as often as possible.  If the mixture is allowed to sit too long unstirred it may start to caramalise and change the flavour of the  To test if the mixture is ready take a very small amount of the mixture and rub it between two fingers.  It should be gummy, cling to both fingers and when pulled apart create strings.   The mixture may also have turned a warming golden colour.

Whilst your mixture is cooking, defrost 1 cup of frozen raspberries.  Push the defrosted berries through a fine sieve so that you have a juice and remove all the seeds.  To this add your rose water, mastic if you are using it and lemon juice.  Add this to the sugar mixture and stir well so that it is fully combined.  Add in the nuts too at this point if you are using them.  Cook for another few minutes.

Prepare your trays for the mixture to set by lining either metal or plastic trays with cling wrap and a sprinkling of cornflour.  Pour the mixture onto the trays until it is approximately 2 cm deep.  Mine covered 2 x brownie tins on the halved mixture. 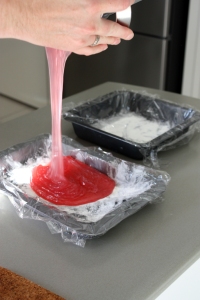 Allow the Turkish Delight to set for at least 24 hours in a cool dark environment, but avoiding the refrigerator.  If you place it in the fridge it will set quicker, however when you return it to room temperature the condensation will cause it to be sticky  Once you have dusted it with icing sugar or cornflour it will melt and go gluggy.

To preserve the Turkish Delight and store it, cut the slabs into bite sized pieces.  Toss through a bowl of icing mixture until well coated.  Place onto a non-stick baking paper lined container and layer until all the pieces are done.

Your turkish delight will keep for a long time in a dry environment.