Homemade gnocchi is one of those foods that I thought would be difficult to make and had consequently never attempted to try.  I had visions of my dumplings being a messy glue that would dissolve at cooking or turn into bullets and leave us with a horrid pasty texture in our mouths.   Never one to be able to resist a challenge in my kitchen I got it into my mind to overturn this perception this month when the book of the month for The Cookbook Guru was Marcella Hazan’s Classic Italian Cookbook.   I thought if ever I’m going to be able to make these then the best place to start is learning from one of the experts in Italian food.

As the month has gone on one of my biggest hurdles to overcome was in finding the right potatoes.  Hazan recommends using Desiree or a similar waxy style, but not new potatoes.  Ironically I’d been seeing these potatoes around in different places for months but when I actually wanted them the only options were dutch creams, ruby lou’s and other creamy styles which I knew wouldn’t work.  Finally I got the time on a Saturday to visit my potato man at the Kelvin Grove Village markets and was rewarded with a plethora of choice.  Sticking to the master’s recommendation I went with Desiree’s for my first attempt.

I’m sure you can imagine my delight and surprise when I attempted to make these last night and they worked!  Whilst I still believe there is room for improvement to the flavour and texture I did end up with pillows which were light and tasty and held their form well.  I found them a lot easier to make than I expected and didn’t need any fancy equipment either.  Whilst they take some time to make and are not for a quick weekday meal I don’t think gnocchi should be a dish that you run away from either.  They were a perfect partner to a creamy green sauce with pan-fried ham that I made to go with them.

In a nutshell these are Hazan’s rules of must to get great gnocchi:

Bring a large pot of water to the boil, add a dash of salt, and then place your potatoes in whole with the skins still on.  Cook until they just give in the centre with a fork, taking care not to test the potatoes too many times to avoid them becoming waterlogged.  Drain immediately and allow to cool slightly so that you can handle them.  You do still want them to be hot when making the gnocchi though so don’t let them get cold.

If you are going to eat your gnocchi straight away get your cooking pot ready by placing another large pot of water onto the stove and bring to the boil.  Turn down to a simmer and leave ready to go.   Prepare you sauce and have warm in a fry pan and ready to add the gnocchi too as it cooks.

Carefully peel the potatoes whilst they are warm using a tea towel to protect your fingers and a sharp paring knife.  Pass the potato through a fine sieve or potato mill into a bowl.  Add 150g of the flour and combine into a dough until smooth.  The mixture should be just slightly sticky to the touch so add more flour if it’s still too gluey.

Sprinkle your bench top with plain flour and then divide the mixture in half and roll into a long sausage.  Cut the gnocchi into even sized pillows.

To cook, place 2 or 3 gnocchi into the simmering water and allow to cook until they float to the top of the water.  Cook for another 5 seconds and then remove them from the water with a slotted spoon.  If your gnocchi is still slightly floury or chewy then cook for about another 10 seconds.  Once you feel confident about the cooking time cook your gnocchi in batches, taking care not to crowd the pot or they will stick together. 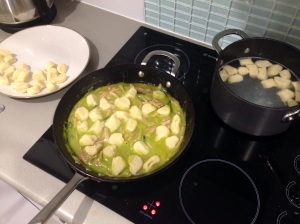 If they start to fall apart then shorten your cooking time by about the same.   Mine did have a slight resistance when I removed then from the saucepan by I then finished them off in the sauce to complete the cooking process.

Serve the gnocchi coated in your favourite sauce and topped with a generous sprinkle of Grana Padano.  Gnocchi goes beautifully with a simple tomato (Napolitana) sauce, pesto or even a Gorgonzola cheese sauce.  For me though I tried this delicious and low fat green sauce and it balanced the flavour wonderfully.  See below for a quick recipe on how to make it.

For any gnocchi that you’re not eating you can freeze them prior to the boiling stage by putting them into the freezer on a tray and then storing in a plastic bag once they have gone solid.  They will keep in the freezer for up to a month.

*adapted from Broccoli and Bacon Sauce by Please Pass The Recipe

Place the brocolli, celery, asparagus and garlic into a small saucepan and fill with just enough water to cover the contents.  Place on a high heat and simmer until the stalks are cooked through.  Remove from the heat and using a stick mixer puree the contents until smooth.  Pour in a small amount of olive oil (about 1-2 tbl sp) until the mixture takes on a creamy type consistency and then season to taste.  You can cook the flowers from the used brocolli to serve with your pasta, although I chose not to in this instance.

To serve,  stir through your pasta and serve with either parmesan or smoked cheese.  I also added some pan-fried ham and a few sage leaves to the sauce for my above gnocchi and it was delicious.

This post is also a contribution towards Our Growing Edge.